Toyota also plans to start producing compact gasoline-electric hybrid cars in lwate Prefecture by the end of this year, enhancing its output in the Tohoku region in the hope that it will also help rebuild the economy in the areas devastated in the March earthquake and tsunami.

Toyota President Akio Toyoda announced the moves on July 19 in Sendai, the capital of Miyagi Prefecture.

The engine production plant, the fifth in Japan for Toyota, is planned to be built later this year next to the auto parts manufacturing factory of subsidiary Toyota Motor Tohoku Corp. in Taiwa town, Miyagi Prefecture.

The new facility will produce around 200,000 engines for compact cars on an annual basis and supply them to affiliated vehicle assembly plants. As for the fuel-efficient compact hybrid scheduled to be released around the end of this year, Toyota will manufacture them at Kanto Auto Works Ltd.’s factory in Kanegasaki town, lwate Prefecture.

A prototype of the compact hybrid that is smaller than the Prius was exhibited at the North America International Auto Show in Detroit in January as the “Prius c.” 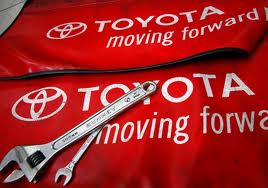