August 2011 – Mitsubishi Motor Corp. announced on the July 25 the launch of the new i- MiEV electric car. The new EV has a sticker price of 2.6 million yen, but the final cost for consumers after government purchasing subsidies will be 1.88 million yen, will bellow 2 million yen mark.

The price cut was made possible by reducing the number of batteries onboard, which will reduce the car’s range but also make it more accessible, and the company hopes to move will lead to wider – scale adoption of the electric car.

Meanwhile, Mitsubishi will released another i-MiEV update in mid August, equipped with a navigation system and a number of new technologies that will push the car’s range to 180km the new model will also be 180,000 yen cheaper than the current standard model with a sticker price of 3.8 million yen, or 2.84 million yen after government subsidies.

Furthermore, the company unveiled the prototype device for allowing i-MiEV owners to supply their homes with an estimated 1,500 watts of electricity from their cars.

“We hope to have a light, compact device ready within the year,” Mitsubishi Motors President Osamu Masuko stated at the unveiling. 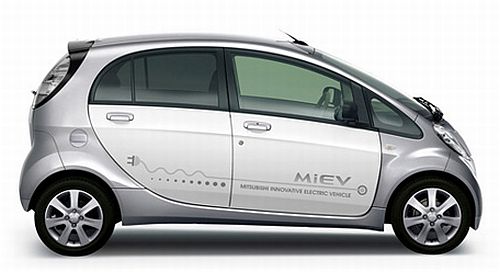